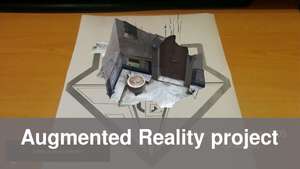 This is the prototype of the audio guide and visualization in augmented reality of a work carried out for the Santa Maria de Vallclara study center.

I designed the prototype of the application, modeled the 3D models in blockout for a first design pass. I captured with photogrammetry and optimized for the phones hardware some of the archaeological monuments and details for the visualization in augmented reality.

This is just a first iteration of the app, it is currently under development, and for now, due to confidentiality concerns, this is all I can show about the project.

Modeling and optimization of models with Blender.
Programmed with Unity 2018.